The Black Panther kickboxing club, which is based in the Brookfield area of Tallaght, was founded in May 1993 by Norman Kelly.

When the club, which is voluntary run and partly grant funded, first started it attracted many young local people, which is still the case today.

In fact, out of the many young men and women that have passed through the club’s doors, many are still actively involved today, and some have even gone on to become instructors themselves, such as Thomas Bateman and Mick Finnegan, in helping the latest generation of local kids take their first tentative steps in the sport. 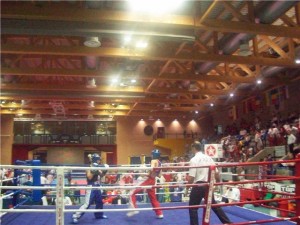 The club, which once counted a young Robbie Keane among its members, is proud of the fact that it has produced many great fighters over the years, including Rebecca Dillon (pictured far left in action in Italy), and has travelled near and far to compete in local, national and overseas’ competitions.

But the club’s ethos runs much deeper than that. While rightly proud of the numerous domestic, European and world kickboxing champions that it has produced since its inception in 1993, the emphasis is also very much on giving local kids, some as young as five and six, an opportunity to develop as responsible young adults in a safe, controlled and disciplined environment.

The club, which considers itself a ‘large social family’, continues to go from strength to strength and has become one of the main focal points of the local community.

In fact, many of the original students are parents themselves now and their children, in turn, are training at the club.

Two marriages have also happened through the club, so we must be doing something right!!!