Top marks to our junior club fighters who put on a five-star show at the Green Isle Hotel last Sunday (2 May).

Evan Cheevers and Mark McSherry got proceedings under way at 7.15pm with a 2×1.5-min demo on the night of the event – and what a performance they gave. 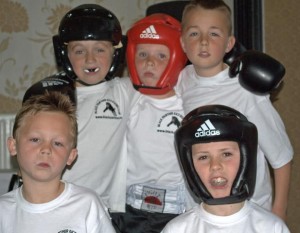 It was a display laced with snazzy kicks and top technique. They were a credit to coach Mick Finnegan, who puts the kids through their paces every week at the Black Panther Gym in Brookfield, Tallaght.

Jack Savage and John Cunningham then faced off in another 2×1.5-min demo – and they, too, put on a show to remember.

Leon Johnson was next into the ring for a 2×1.5-min 24kg contest against Ryan McCullough of Global Kickboxing Club in Ballybrack.

Ryan McCullough got the judges’ verdict, but Leon was by no means disgraced. In fact, there was very little in it.

Even though you didn’t win on this occasion Leon, take a well deserved bow. You were a credit to yourself and a credit to the Black Panther club. Well done Leon.