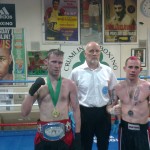 The ”Kickboxing Ireland” organization formally known as (AKAI) all styles kickboxing association of Ireland which is the governing body for kickboxing in Ireland and recognised as such by the Irish Sport Council.
Held its annual full contact Irish national championship kickboxing tournament in Crumlin boxing club
The first out for the black panthers was Martin Kenny the reigning all Ireland champion at -57kg
who was up against Michael Whelan of mugendo kickboxing Sligo. Whelan came out strong
and started the fight at fast speed and tried to put Kenny on the back foot the two fighters went toe to toe for the first round were Kenny pulled 3 points ahead. Michael Whelan came to take the title back to Sligo but Kenny’s experience and determination won through to win the title for the third time.
This was a great win for Kenny and put him on the Irish team. Next up fighting for the Black panthers was Darren O mara in the -81kg category who put up a great fight but came out with a lost to Keith Shelly Global kickboxing Who then met Alan Delmar of Grasp Martial arts who went on to win the all-Ireland title for the first time and put a great performance in the final against the champion Jonathan Lewins.
The next fighter for Black panthers was 3 times All Ireland champion and Wako European bronze medallist 2011 Richard Kiely who met phelim halligan of Galway Martial Arts.Kiely started with great intent to win for the fourth time and was scoring with kicks and punches and was ahead on points and look a sure winner for the fourth time unforgentely he got his arm injured in a clinch
where the Doctor was called to the ring the Doctor stopped the fight in the first round due to the injury and Phelim Halligan was pronounced the winner and New champion.
We also had our junior champion 16 teen year old Michael Caswell who was pronounced the winner for the second year as there was no competitor in the -84kg Michael won a silver in the Junior wako Europeans in Italy last year and hopes to better that and is a good prospect to win a gold in the Junior Wako full contact world championships in Slovakia in septemember this year.
The senior WAKO full contact European’s will be held in burcurests Romania
Also on the cards for the Black panther club is a kickboxing show with Global kickboxing in the Red Cow Pavilion Hotel on Saturday the 12th of May were Martin Kenny will fight for a Irish WAKO pro title over 5 rounds against John Feane of combat kickboxing Kildare,
and there will be a four man fight off for an East coast super heavy title belt which Patryk Gapik Blackpanthers,Billy Crowdle Top Pro Kickboxing, John Mullally Global kickboxing and John Staunton Dragon Lair Kilkenny also a under card of 12 fights.
The show starts at 7.30pm with full bar Tickets 20 euros.