Make sure you’re glued to your TV screens on Friday (30 April).

TV3 are interviewing a number of our members, including chief instructor Norman Kelly, on the station’s flagship Ireland AM programme in the run-up to Sunday’s annual Black Panther kickboxing show at the Green Isle Hotel (doors open 6pm; first fight 7pm).

Norman as well as kickboxers Rebecca Dillon (pictured below, centre) and Richard Kiely, plus AKAI’s Liam Whelan and Lindsey Doyle of Global Kickboxing Club, Ballybrack, will appear on the show. 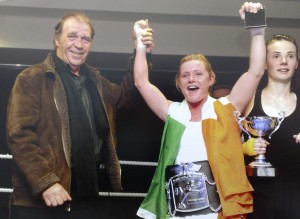 Martial arts instructor Pat Harding will also give a demonstration in block breaking.

Watch out for Rebecca and Lindsey doing some light sparring right at the start of the show at 7am.

This will be followed by an in-depth interview about Sunday’s show with Norman, Liam and Richard, with Rebecca and Lindsey doing some more sparring to promote the event.

You can also see Pat break some blocks.

We are extremely grateful to TV3 for allowing us this opportunity, and to Aidan Cooney and Victoria in particular.